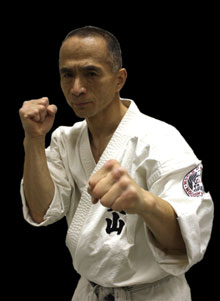 “Shihan” (Master) Mitsugu Sakai is a “Nana Dan” ( Seventh Degree Black Belt ) certified instructor in the USA OYAMA division of the World Oyama Karate Organization. Shihan has been studying and teaching karate for over 30 years. He trained in a special apprenticeship position, “Uchi-deshi”, under Soshu Shigeru Oyama, the founder of World Oyama Karate.

Shihan Sakai is a veteran tournament competitor, having won repeatedly in both full contact and point system fighting match. He is 3 times World Oyama Full Contact Champion. He is expert in the practice of ” kata” (forms) competitions, in which he has taken first place numerous times. Shihan Sakai excels in teaching the following martial arts weapons: nunchaku, tonfa, bo and sai.

Shihan Sakai’s teaching philosophy emphasizes respect, patience and appreciation as focal points for his students as they become proficient in this dynamic martial arts style. He empowers this students with self discipline, self esteem and confidence as they develop their physical capabilities. Shihan Sakai stresses “kihon” (basics) as foundation to the more complicated and sophisticated movements in kata and “kumite” (fighting).

His dojos are located in White Plains, New York and Linden, New Jersey.

“Soshu” Shigeru Oyama was born in Japan in 1935 and began studying karate under Mas Oyama at an early age. He became the Saiko Shihan of Kyokushin Karate and was sent to the United States to introduce Japanese full contact Karate to the US. Fighters traveled from all over the world to train under him and he developed many world champions. In 1981, he and his brother, Saiko Shihan, founded World Oyama Karate. Soshu Oyama has published several books and videos on karate and is recognized worldwide as a top Japanese karate master. He has fought the legendary 100 man kumite, winning 100 consecutive fights with black belt opponents in a single day. Soshu Shigeru Oyama is a 10th degree black belt and the Executive Committee Chairman of World Oyama Karate. He died on February 14, 2016.